I have been working on the KLR to get it prepared for exploring on dirt. I even had a chance to ride it briefly with the new knobbies on both pavement and dirt. I felt like the relative dirt rookie that I am. It will take some practice to get comfortable.

I have also been scheming on shipping the KLR out to Colorado, leaving it there for several years, and going out each summer for some exploring. I am also thinking about taking a 2 day dirt riding school. On my way to the school, I thought about riding over Hagerman Pass. I remember Hagerman Pass as a pretty easy dirt road that I last drove in a rented Firebird. From what I can tell, it has degraded to the point that it is now restricted to high clearance vehicles. Not a problem for the KLR, but no more low cars. 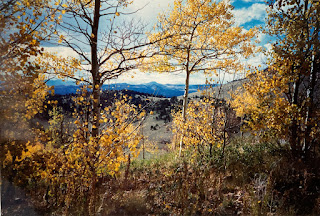 That got me reminiscing about earlier trips to Colorado and passes I've crossed. One of those, Schofield Pass, I have done twice for work, once in a passenger car. It was always a tough pass with several tough sections, but I never realized how dangerous it was. Schofield Pass now holds the title of the deadliest pass in Colorado with 17 people dead trying to cross it. I think the count was only 6 when I was there last, so people have been busy.

As an aside, on one of those work trips I met a beautiful girl on a dirt bike and watched her pick her way past our little caravan and up Schofield Pass. What she was doing seemed so much easier than what I was doing that I got thinking about motorcycles, so I think I need to visit Crystal City at least on the KLR. To this day, I wonder what she thought of the one tall American among 7 Japanese men and our trying to do the pass in that passenger car.

Below Schofield Pass is the ghost town of Crystal City and that brings me back to an off-road trip that my father and I took in the mid-90's. Actually, to be correct, I can't call Crystal City a ghost town. It has never been occupied through the winter, but the people who owned the mines in the late 1800's loved that valley so much that they kept the property after the ore was gone. Their families still own the land and many come up to stay for the summer. It's a favorite place of mine, so I can understand the sentiment. 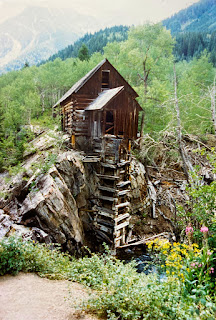 My father had never been off-road and I really enjoyed the smile on his face as he bounced the borrowed Jeep across the rocks as we explored the Colorado back country.

Although we didn't try Schofield Pass, we did visit Crystal City and it's beautiful valley. The Power House shown in the photo is both historic and innovative. Water was brought in from the reservoir and the water turned a vertical water turbine which in turn drove a generator for electricity. The vertical log structure you can still see housed the turbine.

Since we weren't going try Schofield, we turned north out of Crystal City into the Lead King Basin, before turning back west to Marble. What a beautiful valley. 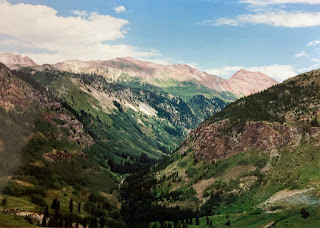 Two other passes from that trip stand out in memory, Stony and Taylor. Stony is further south in the San Juan Mountains. Several small creeks gather from slopes around Stony and form the headwaters of the Rio Grande River. That wouldn't be special on its own, but there is a big, beautiful valley, 20 miles long, and surrounded by 13,000 feet peaks. Just one little 2 track road down the valley, it seems very pristine. Of course, the truth is that it was the main supply road from the east to the Silverton mining district, so I'm sure it wasn't pristine 130 years ago. The picture shows my father and the Jeep far down that valley. You can even glimpse the Rio Grande in the picture, wide, clear, and energetic. 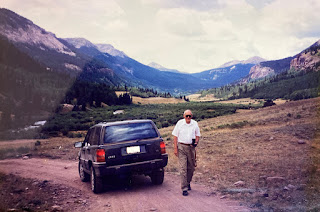 The other pass, Taylor Pass, was far more of an adventure than Stony. We start high in Taylor Park and started climbing the south side of the pass. Part of the way, the trail dips down into the creek and used the creek bed as the trail. With high, rocky banks on both side and water rushing down the mountain and splashing against the front of the Jeep, both my father and I weren't smiling, we were laughing, and hoping we could eventually get out of this creek. The picture shows the place where the trail finally exits the stream. What a relief. 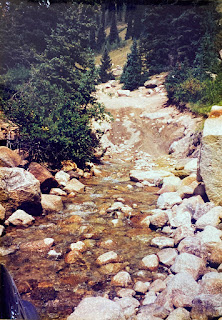 It likely won't be this year, but I hope to get back to some of these places on the KLR. This year will probably be chasing some family history a bit further north. But these pictures have certainly stirred those memories and made me want to go back and get the feel of those places again.

Jac Brown
All these pictures are thumbnails. Click to enlarge.